The twenty fifth anniversary of the release of Outskirts brought Blue Rodeo to a sold out Oshawa crowd at the General Motors Centre.  It was an evening of retrospection and a double set musing over three centuries of music
The first big roar of the night was to the opening beat of What Am I Doing Here?  There was a great chuckle in the audience as Greg Keelor remarked that the song was written about one of the worst gigs that the band ever played.  He recalled that they “were the headline act of what seemed like the battle of High School bands.”
Although this was a sold out performance there were many empty seats.  Only after a few songs did the audience fill out.  Jim Cuddy welcomed the crowd.  “It’s Saturday night inOshawa.  I see they serve beer here.  So beer was more important than the first couple songs?  It’s alright.”

This anniversary tour is very simple.  Having walked the whole venue, there was no sign of any merchandise for sale.  This truly was a night of music and retrospection.  Blue Rodeo came to entertain their fans and thank them for twenty five years of memories and support.
As a band they have grown over the years.  On this particular evening they were a septet:  drums, piano/organ, steel guitar, lead guitar, bass, and two lyrical and melodic lead singers.  This is oversimplifying things, but as a whole Blue Rodeo played with great chemistry, energy, and exuded great joy.

The stage was beautifully lit.  The design was simple and colourful, giving just enough warmth to the industrial cold steel and concrete that we were surrounded by.  I am sure that the intoxicating herb waffling from in front of me did its part to properly warm the hearts and minds of the happy Oshawa crowd.
At the end of the first set which was followed what must have been a celebratory twenty minute intermission, the band decided to surprise Colin Cripps (lead guitarist) with a birthday cake.  He blew out the candles and was serenaded by the crowd with a warm Happy Birthday.

The second set was a quiet affair.  The band unplugged their instruments to treat the crowd to an acoustic set.  They sat together at the front of the stage and performed some new songs from their forthcoming album this fall.  The new songs were well received by the audience.
There were two highlights of the acoustic set.  The first was the song One Light Left in Heaven.  It was simple, melodic, and tearful.  Jim Cuddy’s voice pierced and boomed throughout the venue.  The second highlight was the acoustic rendition by Greg Keelor of Dark Angel.  It provided a perfect balance and showed why Blue Rodeo continues to echo our Canadian consciousness.
The band ended their acoustic set and led the crowed with some favourites and sing-a-longs.  They were joined on stage by Wayne Petti from Cuff the Duke.  After the first song, Jim Cuddy humorously asked for some distance between Wayne and Greg, as they were becoming a distraction through their closeness.
There was a great Oshawa Choir in the sold out arena, but it took a few encouraging words from Greg Keelor to get there.  He told the audience that they needed to “make their head ring like a bell, and make their genital sing.”
Lost Together was the closing number in the first encore and it left everyone satisfied and happy.  I am sure the beer and organic air had something to do with it as well, but all credit must be given to Blue Rodeo.  The second encore was an acoustic performance by Jim Cuddy and Greg Keelor.  It showed their great friendship and partnership.  It hinted of things to come. 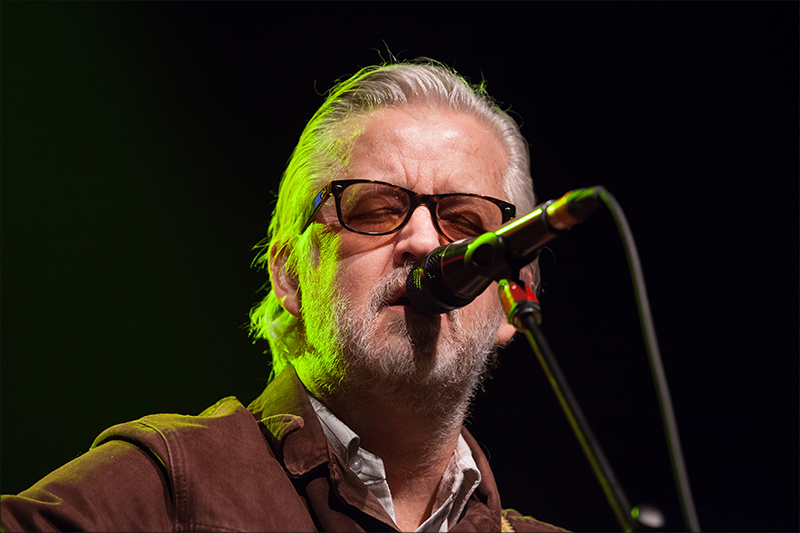